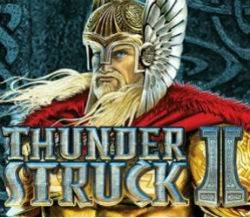 A sequel to one of the most popular Microgaming pokies, Thunderstruck 2 may even be better than the original. It still features the same theme of Nordic gods, but has even more awesome bonus features – expanding Wilds, free spins, multipliers, and the works. It also has an awesome jackpot, even though it’s not a progressive game. Get lucky in the Wildstorm bonus feature and.

This is an innovative bonus round, in that as you earn more entries into the Hall, more free spins become available. There are four Halls, each with its own character and reels, and access is only granted to a higher Hall after the feature has been triggered a set number of times:

Although much of the look of the first version has been retained, the production values have gone up in this later edition. The theme, figures and images taken from Norse mythology, and the characters are created in a bold, heroic style reminiscent of gaming and fantasy fiction. The accompanying music is suitably full of awe and majesty, without being overbearing, with wins punctuated by the crash of thunder and trumpet blasts. Overall, this is one of the most aesthetically pleasing online pokies on the market today.

The progressive slots nature of the Great Hall of Spins bonus round is an innovative feature that makes playing the game for extended periods of time increasingly lucrative. The Wildstorm feature is also an imaginative feature, which is extremely lucrative, being potentially worth up to $121,500.