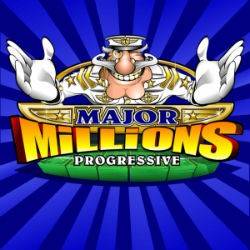 As the name suggests, Major Millions is another one of those high-paying making progressive jackpots from Microgaming. The jackpot is often floating around the $400,000 but it has also paid well above the million mark several times. Don’t be fooled by the slightly dated look and feel of this game – there are plenty of Wilds and Scatters that will open hidden bonus features.

The graphics on Major Millions are simple yet fun, keeping with the style of the Microgaming slot line. You know there is a winner when the paylines light up, and scatter and wild symbols spin together with whistles and bells. Sound effects include a military marching tune with the Major laughing, whilst the background sounds will bring back memories of time at the fairground.

Players can get a massive progressive jackpot which is valued from $250,000 – $1,000,000. This value depends on the last time it was hit. There is no need for a special strategy or access to a side game or bonus round to win this jackpot. All you need to do is land five major millions symbols on the 15th payline and you’re a winner. It’s good to know that you must play the maximum number of paylines. If you don’t play the last payline, you won’t have any chance to win the big one.

This video slot entails two different progressive jackpot slots, one with 3 reels and the other with 5, both having 15 paylines and the same jackpot prize. The 15 paylines are great to generate numerous winning combinations. The more players play and miss the big jackpot, the more progressive jackpots grow. This keeps the excitement alive and is one reason players love Major Millions! Microgaming has partnered with all video slots from all registered online casinos and this has resulted in one extremely lucky player from Europe cleaning up with a whopping $1.8 million! The average payout at Major Millions is around half a million dollars with occasionally a winner about every three months or so!

There is a jackpot meter at the top of the screen which updates in real time. This gives players an idea what the prize pool is and how fast it rapidly increases. Also, you will see a quick spin feature and there is also the option of auto play. 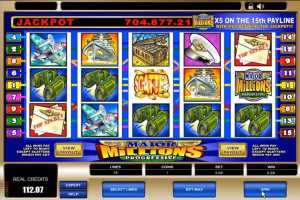 When playing Major Millions, the coin values are fixed at 0.20 per spins and you can select as many paylines as desired, however, you must have all 15 lines in play on a spin to win the big progressive jackpot! The wagering requirement is $3.00 per spin on either reel, which is what most players do when spinning in general. To grab the big win, you must land the Major Millions Wild symbol on the 15th playline. If you get this combination on any of the other 14 lines, you claim a 8,000-coin prize. The 15th is the Jackpot trigger!

There is no shortage of special features and additional ways to boost your winnings on Major Millions. It is possible to see the scatter symbols appear on any payline and this increases your win by 3x, 5x, or 50x. This depends on how many scatters you land (up to 5 per spin). It’s good to know that the wild symbol can be substituted for any symbol except for the scatter. Also, when you land five wilds (the max amount) on a single payline, you automatically win the top non-progressive jackpot prize of 8,000 coins. Other features players can enjoy are the quick spin, regular and expert modes.

Major Millions is one of the oldest classic slot games and probably the most straightforward slot out there! Microgaming is the developer here and has given this game a sense of simplicity that many others crave. Major Millions is known for mega jackpot winners and has an impressive win history. Here you will find a military theme with a big gun and not much entertainment except the excitement of the reels. Sometimes, that’s all you need if you are looking for easy navigation and basic design. You will hear a soundtrack of military marching band music plus a lively crowd of spectators and every time you have a winning spin, each symbol releases a different tune. In the past two years, the Major Millions progressive jackpot has been triggered 43 times! The jackpots increase all the time due to the games population growth. This is great news for slot lovers and even though the game takes you back in time with a simple design, the excitement of the ever-growing progressive jackpots has kept this game alive!