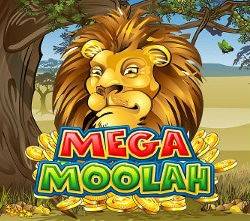 Around since 2006, Mega Moolah has worked its way itself into the hearts of many pokie enthusiasts. Not only is the safari game theme appealing and the wins forthcoming, but this slot is world renowned for its record-breaking Mega Jackpot wins which are never less than NZ$1 million!

A trip through the Savannah over these reels will land you in all sorts of adventure with features rolling up along the way. Keep a look out for Wild Lions and a Free Spin bonus round that pays triple the normal value for prizes up to 1,800x your bet.

While we are not sure how a Safari-themed game is connected to Mega Moolah, it’s a concept that works, as this game is very popular among progressive pokie players.

Load up the game and it immediately becomes evident that the adventure on these reels takes place in the Savannah. The background vistas are those of the iconic golden grass and Acacia trees in the Serengeti, while several quirky wild animals and other betting symbols line the reels. 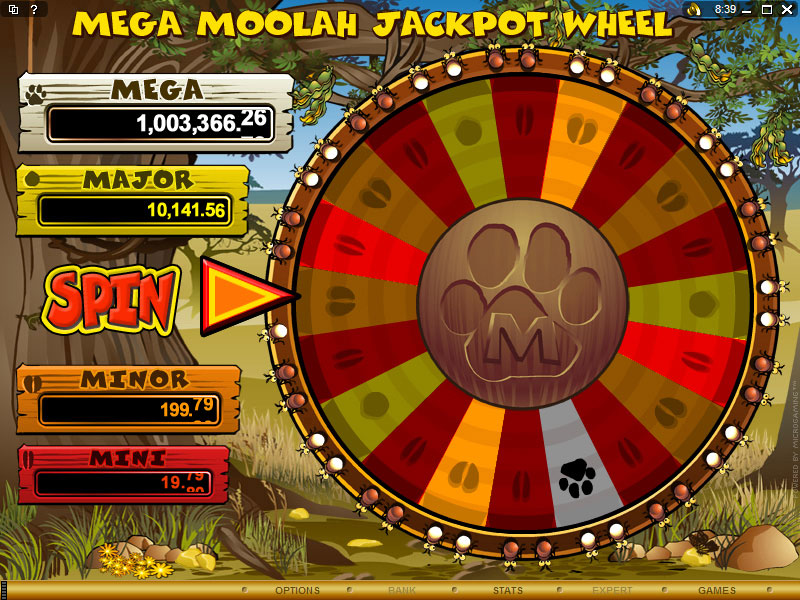 The graphics are a bit dated, but the overall atmosphere of the game is not affected by this.

The symbols and their payouts (base game) are as follows:

There are two special symbols in the game. The Lion is a Wild and can substitute for all standard symbols to complete wins. A combination of 5 lions holds the highest natural combination value. The Wild will also double the value of all wins it forms part of. The monkey is the scatter symbol. She is key to triggering the free spins round.

All of these symbols and graphics come together nicely with the sounds of Africa. Close your eyes and you will hear nature come alive around you. Spin the reels and an original African tribal score rings out in support of the game action. The game provider has done well to package this Safari adventure.

The game is played over 5×3 reels and 25 paylines for a wager of between NZ$0.25 and NZ$6.25. A very low RTP of 88.12% matches with a low variance math model. This combination means that while smaller to medium wins may frequently pop up, the big wins that this game is capable of are extremely difficult to land.

It makes sense that jackpots the size of this Mega one will not be given away every day, so you must realise when playing this game that the big guns only come out from time to time. There are some great features to tide you over though, and these can get by on their own merits.

If you land 3 or more scatter symbols anywhere on the screen, you will trigger the free spin bonus round. Here, you receive 15 free spins where every win landed will provide you will triple the normal prize value per combination. 5 Wild Lions in this round will pay out up to NZ$11,250.00 instead of the normal NZ$3750.00. This is the feature you will want to land for the big money.

The Jackpot Wheel is randomly triggered in the game. The higher you bet, the better chance you have of this feature landing. You will get to spin it once for the chance to win one of the 4 progressive jackpot prizes shown on the screen.

While progressive jackpots accumulate over time as people play them across the Microgaming network of casinos, they are seeded to payout minimum amounts:

Winning the Mega Jackpot has the potential of altering your life forever, as it is not uncommon for this reward to exceed NZ$10 million. It is by this feature that we realise the apt naming of this Mega Moolah slot.

How to play Mega Moolah

To start playing this game, you will need to select your wager on the screen first. On the more modern template for the game, you can click on the icon that resembles a stack of coins and then adjust the bet with a sliding meter from NZ$0.25 to NZ$6.25.

To get used to the game, you might want to start with minimum bets, but you can increase the wager later on, especially if you want the Jackpot Wheel to land. The game variance is low, so it is not designed to drain your bankroll quickly.

Once the wager is in place, spin the reels with the round spin button. If you do not have the patience for the slower reel spins, you can speed up the action by clicking on the lightning bolt icon. This will put the game into turbo mode. This will not affect game outcomes.

If you would prefer that the game ran on its own, you can select the Auto Play feature to spin between 10 and 50 automated spins for you at a set stake.

Wins are rewarded when you land 3 or more matching symbols over a single payline from left to right on adjacent reels. In Mega Moolah, the Lion, Monkey, Elephant, and Buffalo will start paying from combinations of 2 or more symbols.

Thanks to Microgaming’s Quickfire platform, Mega Moolah can be played on your mobile device straight from the browser, without any further download needed.

While Microgaming started providing desktop games and then moved onto mobile, many of their newer games are designed to suit mobile devices more. Mega Moolah has been reworked from its original Flash setup to adopt this same ethos.

Now if you play on mobile or desktop, the layout is very similar. The button layout is positioned differently on the smaller screens to suit thumb play, but the effects of each control are the same.

What is the most amount of money that Mega Moolah has paid out at one time?

Does Mega Moolah have any Awards?

Mega Moolah has a Guinness World record under its belt for highest jackpot payout on a pokie machine.

Are there more Mega Moolah casino games in the series?

Where can I play Mega Moolah in New Zealand Dollars?

Most Microgaming casinos offer Mega Moolah as a game option. New Zealand players can play Mega Moolah at All Slots Casino for a minimum deposit of NZ$10!