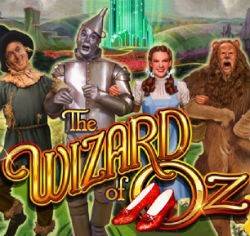 Follow the yellow brick road with Dorothy and her friends from Oz in the Wizard of Oz slots. This game comes fully loaded with bonus features including a jackpot symbol, free spins, bonus games, expanding wilds, scatters, and more. You could win up to the $50,000 jackpot instantly in this lucrative slot machine. Powered by Williams Interactive (WMS), Wizard of Oz slots recreate the classic movie featuring Dorothy and her magical friends from the yellow brick road. Reels feature images from the iconic movie like Dorothy, Toto, the Tin Man, the Scarecrow, the Cowardly Lion, and the Wicked Witch of the West. Each symbol unlocks rewarding cash prizes and bonuses with every lucky spin.

The Wizard of Oz slot machine by Williams Interactive has 5 reels and 30 paylines. To begin, players must choose how many paylines they want to activate during their bet. Bets range from $0.01 to $5 per payline. The maximum bet is $150.

Those who love the traditional slot machines in the casino will love Wizard of Oz sound effects. The slot stays true to the typical sounds of slots at a real casino with ringing and dinging after each win. The reels themselves will make fans of the classic film want to play. You’ll recognize the legendary Judy Garland as Dorothy along with her friends like the Tinman, the Scarecrow, and the Cowardly Lion. Not everyone in the Land of Oz is friendly. The Wicked Witch of the West also makes an appearance. Other reel symbols include iconic images from the movie like a twister, Dorothy’s house, ruby red slippers, a hot air balloon, and Toto the dog.

The Wizard of Oz slot machine doesn’t feature a progressive jackpot. However, the game has a jackpot symbol awarding a huge payout instantly. Because the jackpot is not progressive, you win a flat prize that doesn’t change. Landing on 5 jackpot symbols pays out up to $50,000 instantly!

You can find Wizard of Oz slots available at casinos featuring WMS games in New Zealand. Depending on the casino, you can access the game from your computer browser, downloaded casino software, or on the go through your smartphone or tablet device. One of the main reasons the Wizard of Oz slot machine has become so popular is because this game offers a ton of bonus features. Throughout the gameplay you could come across a jackpot payout, free spins, bonus game, scatters, expanding wilds, and wilds. With so many potential bonus features, gameplay stays interesting and exciting. Glenda the Good Witch could potentially trigger the expanding wilds feature which turns an entire reel wild. Wild symbols substitute for all symbols except the jackpot and Oz feature symbol. That means much higher chances of landing on a winning payline. Meanwhile, the scatter symbol could give you access to the Oz Pick Feature. This special bonus allows players to choose from a cash prize, the Winged Monkey feature, or the Road to Emerald City feature. The Winged Monkey feature gives you free spins equal to the number originally awarded. The Emerald City triggers the bonus round in which players choose symbols to reveal prizes. The Emerald City round starts when players can choose emeralds which reveal a character land, Emerald City, or monetary prize. During the character land option, players either go to the Tin Man apple orchard, the Cowardly Lion dark forest, the Scarecrow corn field, or the Wicked Witch Castle. In each of these lands, you select gold charms to reveal prizes.