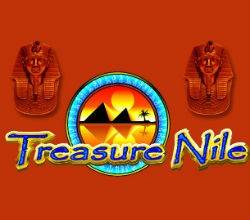 Treasure Nile is a progressive jackpot from Microgaming with an Egyptian theme. It’s a 5 reel, 9 payline game with an average payout of around of roughly $130,000. One of the older Microgaming jackpots, Treasure Nile does have a rather dated look and feel, but it’s still a colourful enough game and not too hard on the eyes.

The adventure through the Nile is filled with symbols like the Sphinx, pyramids and the Tutankhamun. While the symbols might be quite mysterious, getting started with Treasure Nile is unbelievably simple. All you have to do is set the number of lines you would like to bet on – from 1 to 9. We recommend betting on all 9 lines to maximise your odds for a win. Unlike other slots, you cannot set your coin size in Treasure Nile. So you’re looking at $4.50 a spin. Certainly, this is not a cheap game, and it’s not the best choice if you’re on a budget. To offset the price per spin, pick up a big welcome bonus so you have extra ammo in your casino account. The special symbols are as follows:

There regular symbols, from high to low value

Treasure Nile has an Egyptian theme with all the standard symbols. While they are all vibrantly coloured, and the reels spin smoothly the game does have a boxy slot look and will feel a little passé.  Let’s just say no one plays Treasure Nile for a cinematic experience in 2018.

Average payout for Treasure Nile is around $130,000. It’s not in the million range, but it’s still a very handsome amount to walk away with. To win the jackpot, spin 5 Tutankhamun symbols on the 9th payline while playing with the maximum bet.

Sadly, there aren’t really any special features in Treasure Nile to report on, but do pay attention to the following:

This is the setting sun with the pyramids. As with all Wild symbols, it can substitute for any other symbol except for the scatter to form a winning payline. However, Wilds cannot complete a payline for the progressive jackpot – for that you will need 5 solid Tutankhamuns.

Scatters will add to your payline wins, while multiplying the total bet staked.

Treasure Nile’s Eyptian theme is nice enough, but it’s not going to blow anyone away. While not exactly a millionaire maker, this game’s progressive jackpot can still reward the lucky and the patient around the hundreds of thousands mark. However, beware that if you want a go at the jackpot, you will have to play all 9 lines, making it $4.50 per spin. It’s not a cheap game, but if you feel luck is flowing your way, then Treasure Nile might just the game to check into.