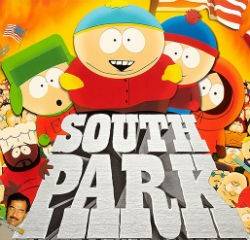 South Park is a clever pokie adaptation of the mega-popular adult sitcomic featuring 4 pottie-mouthed youngsters in a dysfunctional American suburb.  Net Entertainment brings its naughty creative juices to the fore in this 5-reel, 25 payline video pokie with a respectable 96.69% RTP. It’s one of the more humorous and thrilling adaptations of a show we’ve seen, especially in its bonus features.

First get in the mood. Lighten yourself up. Sit back with a bag of chips and have a good fart. You’re about to enter South Park. You’ll need to relax because this is a high variance game, where the big wins come relatively few and far between. But when they do come, man, they can be sweet! Players control the bet amount by selecting different line amounts (up to 25), coins per line (up to 10) and coin denominations from $0.01 to $0.50.  Try AUTOPLAY if you’re feeling lazy, and just want to let it ride for up to 25, 50 or 75 spins. If your proverbial balls are made of brass, tap MAXBET and feel like a high roller. But most folks in their first visit to this dysfunctional American suburb will want to simply spin, going one round at a time and enjoying the sights and sounds. Though there is a nod to three-dimensionality, the reel symbols are in the same naive illustration style as the show, and the heroes are the same four kids, each of whom has a bonus game. Standard WILD and BONUS symbols are labeled explicitly.

As is typical, winning combinations proceed from the leftmost reel, except BONUS symbols which can show on the third or fourth reels, triggering one of the rare but wondrous bonus game sequences.

The design is consistent with the rebel spirit of its television inspiration. There are humorous animations from the show scattered about the gameplay.  Each of the bonus games is well-invested, with clever touches based on the personality and tastes of the vomiting, kicking, burping characters in whose honour they were named.

South Park is not a progressive pokie, but Wilds can produce multiple payline wins. But the big money comes in the bonus games you get to by pulling in a bonus symbol on reel 3 or 4.  Prizes in the free spin round, filled with multipliers, can reach 90,000 coins. Keep in mind, however, that some win amounts are capped, and the life-changing prizes can only be won at maximum bet. Not for the faint of heart.  For the base game, the maximum payout is 7000 coins.

Each of the main characters has a bonus round of his own, each coming with 10 free spins:

Stan will vomit on Wendy when sticky wilds appear across the reels, each of which adds 2 free spins. Payout, however, is capped at a disappointing 30 times bet.

Look for Baby Ike wild on reel 5. After he appears, Kyle kicks him onto the lower reels, bouncing him into one of the 5 possible options: multipliers, coins, or more spins. If you are lucky enough to get the 10x multiplier, you can win up 300 times your stake.

NetEnt kindly gave accident-prone Kenny some extra lives, 3 to be exact. Your mission is to assist him in navigating his way across Multiplier, Danger and Win zones. The Danger zone may take one of his lives. But if you succeed, you can win up to 2,500 coins or at MAXBET, a meaty 556x.

In the Cartman second screen game, our hero searches for hippies hiding in the bushes till the police arrive. Pick a bush, and you may get either money, a multiplier, bonus game, a warning or game over, if an officer of the law catches you twice doing something illicit. This is the most lucrative bonus round, with multiplier-fueled wins up to 5,000 times bet.

In addition to the four bonus games, there are three mini-features: Terrance, Phillip, and Mr. Hankey, all of which throw up random wilds on the reels. In the first two, three wilds are placed on the three middle reels, while in the third there are either 3 or 5 wilds offered on reels 1,3, and 5.

South Park is crude, offensive, and – if you have patience – a potentially rewarding pokie to play. It’s humor and visual effects are amusing, but the really attractions are found in the 4 bonus games, where there is big money to be won, fueled by wilds and multipliers. With a wide bet value range, the game is well-suited to either high rollers or newbies.