Robin Hood and His Merry Wins 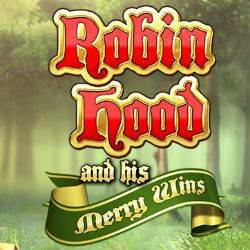 Robin Hood and His Merry Wins

Robin Hood and His Merry Wins slots is a low to medium volatility online pokie with a 96.1% RTP. The biggest jackpot during either base play or during the free spins bonus round is $30,000 for hitting 5x Marian’s Prize scatter symbols anywhere on the reels when betting the max. Other major jackpot wins include: $10,000 and $4,000 for hitting and 4x or 3x Marian’s Prize scatter symbols respectively anywhere on the reels; $7,500 for hitting 5x Robin Hood wild symbols when betting the maximum.

Triggered by hitting 3x, 54x or 5x scatter symbols anywhere on the reels, the number of free spins awarded depends on how many scatter symbols trigger the bonus feature:

The Marian’s Prize bonus is triggered by hitting 3x, 4x or 5x Marian’s Prize scatter symbols anywhere on the reels. The size of the prizes on offer depend on how many scatter symbols trigger the bonus. There five levels in the bonus; at each stage you are presented with five wanted posters. You pick one, and this will reveal either a cash award or the Sheriff of Nottingham; if you reveal a prize, you collect it and move to the next level, but if you find the Sheriff, the bonus round is over.

On The Mark bonus feature

This is a randomly triggered feature that is available during both base play and the free spins bonus round. Three targets appear, you select one; Robin Hood then fires an arrow at this target to reveal a multiplier. You can win up to 12x your total bet.

Robin Hood and His Merry Wins casino game features fun, cartoon-style symbols that animate and become 3D on a winning spin. It has lively medieval-style lute and pipe music as a soundtrack, with exciting bursts of drums on big winning spins or when a bonus round is triggered. The symbols are characters from the Robin Hood legend, such as Robin himself, Maid Marian, the Sheriff of Nottingham and King John, and the game is set against the background of Sherwood Forest. Unusually, the spin button is in an unconventional position, which is in the middle of the fifth reel rather than below them as is the case with most online pokies. If you’re new to the game, it can take a while to find it!