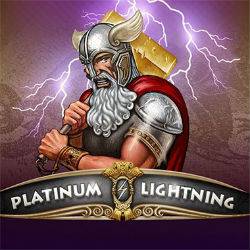 Platinum Lightning slots is a new video pokie released in early 2018 by BGAMING, formerly known as SoftSwiss. The game is built using blockchain technology, meaning it can be played using cryptocurrencies, and has the ever popular Greek mythology theme.

Platinum Lightning slot is a 5 reel 25 payline video pokie where all wins pay left to right (except for scatter wins, which pay anywhere on the reels). There are four coin sizes — 0.10, 0.25, 0.50 and $1.00 — and one coin can be played per line. This means that the max bet ranges in size from $2.50 up to $25.00. Payline wins are multiplied by the line bet, while scatter wins are multiplied by the total bet.

Hitting 2x Minotaur symbols on reels 1 and 5 triggers the Platinum Lightning Free Spins bonus round. During this feature, reels 1 and 5 become expanded sticky wilds and stay in place for the duration of the free spins bonus, which significantly increases the chances of hitting a winning combination.

After any winning spin, you have the chance to gamble and increase the size of your payout. On a separate screen, you are presented with a face down card and you can choose either the colour of the card or the suit. If you predict the correct colour of card, your win is multiplied 2x, while if you select the right suit, you increase your win 4x. You can gamble any winning spin up to five times, but if you pick incorrectly at any time you lose your entire winnings.

Platinum Lightning slots game is built using blockchain technology and includes the Provably Fair feature. This enables you to check for yourself at any time that the game is being operated fairly and that each spin is randomly generated. By clicking the gears icon, you are able to verify if a spin has been conducted without the result being influenced by either the game provider or the casino and that the result is truly random.

Platinum Lightning casino game is very impressive visually, and the colour scheme and style of the symbols beautifully recreate the world of ancient Greek art. The symbols include characters and images from antiquity, such as Zeus, Medusa, Diana (Goddess of the Hunt) and Themis (Goddess of Justice), along with lightning bolts, an ancient ship, classical Greek coins and weapons. Unfortunately, the soundtrack isn’t up to the same standard. It consists of a repetitive and stereotypical piece of Greek bouzouki music that doesn’t change, even during the Platinum Lightning free spins bonus, and isn’t really in keeping with the high production values on display elsewhere in the game.

Platinum Lightning casino game has a popular theme that is beautifully realised and so the game looks stunning. The gameplay is relatively straightforward, although this is enhanced by the inclusion of the Platinum Lightning free spins feature. Many pokies players will also no doubt appreciate the fact that this is a game that can be played using both conventional payment methods and cryptocurrencies, such as Bitcoin. Check out the Platinum Lightning slots game for yourself at our featured New Zealand online casinos.