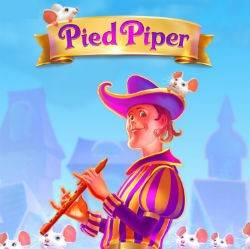 Based on the rather macabre fairytale where the Pied Piper lures away all the village children after being betrayed by the people of the town, this online pokie is a lot more fun.

March along with the Pied Piper and join the joyous celebration to big wins. With Piper Respins, Mystery Retrigger, Free Spins and Piper Wild, there is plenty to see and do in the town of Hamlin as you spin and win.

The bonus round is where all the action is as the Pied Piper marches across the reels and brings along huge prizes and the mice actually help for a change as these Wild symbols trigger free spins.

The storybook theme with a medieval soundtrack can initially seem cloying in its sweetness as you follow the Pied Piper’s journey through the town of Hamlin. In a reversal of the script, you actually want the mice to join you on this journey as they bring the big wins.

The cobbled streets make for an inviting backdrop as the reels spin with the Mayor, his wife and his daughter, bags of gold, silver keys as high-paying symbols while playing card symbols fill in the gaps.

Wild mice make an appearance as bonus symbols and, when the Pied Piper makes his way onto the reels, his visit is accompanied by a flurry of flute notes in an attempt to get him to stay. When he helps you to that big win, the animated trumpets will ensure a celebration of note.

The pastel colours and storybook theme may not appeal to many at first glance but as soon as you unlock the free spins round, your patience will be justly rewarded.

This mid volatility game has an RTP of 96.32% and pays well if you give it enough time. The mystery retrigger feature and free spins bonus round can pay off in a big way and, when the Pied Piper lands in the right place, he may march across the reels to secure further wins in subsequent spins.

While a flute flurry accompanies the appearance of The Piper Wild, the symbol is a 4×1 stacked, it only initiates the Piper Respins feature when it lands fully in reels 3, 4, or 5. This Wild symbol substitutes for all symbols except the Bonus Scatter symbol.

Landing three bonus scatters in the same spin will trigger ten free spins and result in anything from 1 an 6 Mouse Wild symbols getting added to the reels with every spin within the round.

The Piper Wild needs to land fully in the reels in order for the Piper Respins feature to be triggered, either in the base game or in free spins.

Each respin with the Piper Wild symbol, and any Mouse Wild symbol will see these symbols walk one reel to the left. This can trigger further respins and unlock greater wins.

During the Piper Respins feature, there’s a chance securing a Mystery Re-trigger on the final spin. This will cause the Piper to enter the game on the rightmost reel and you will be awarded 5 new respins.

This symbols are perfectly suited to the theme and follow the storyline very well. With realistic cartoon mice and a cheerful score, the Pied Piper will make you think of simpler times when forest animals behaved like humans.

How to play Pied Piper

Simply use the bet selector to choose your wager starting from as little as 20 cents to $100. You can then choose to spin the reels manually or make use of the AutoPlay feature.

When using the Autoplay feature, the game will use the wager you’ve set to automatically spin between  10 and 1000 rounds.

QuickSpin has made a demo version of this game available for players to get a feel for the reels before needing to play for real money. This is a great way for players to get a sense of how the game pays out and how much they need to wager, in order to qualify for big wins.

All games created by QuickSpin are mobile-friendly and are optimised to play on both Android and IOS devices. Pied Piper is responsive and displays with very little loss of functionality on a smaller screen.

With busy lives comes the need for interactive gaming in a location and on a device that best suits your lifestyle. Thanks to the mobile-first commitment of an award-winning software developer like QuickSpin, many of us enjoy having the option of playing casino games on the go.

Can I win real money by playing the Pied Piper pokie?

Yes, this game has an RTP of 96.32% and you can expect to start winning quite soon after you spin the reels using real money.

Is it safe and legal to play casino games in New Zealand?

Yes, as long as you're over the age of 18, you can legally play casino games online or at land-based establishments.

QuickSpin is an award-winning software developer who creates games for online casinos. With offices in Sweden and Malta, this game creator is known for producing high-quality gaming experiences through innovative gameplay.

Can I play Pied Piper on mobile?

Yes, this game has been optimized for play on smartphone devices and works well as long as you have a stable connection to the internet.