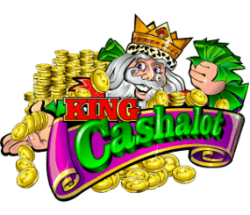 King Cashalot was one the first progressive jackpots by Microgaming. It features a medieval banquet and has that boxy feel of old video slots, but nevertheless the action is smooth and fast. The Treasure Bonus feature has some great multipliers in store. The jackpot itself usually pays out around the $620,000 mark, which is certainly more than enough for a handsome feast.

The setting for King Cashalot is a banquet in the Middle Ages, and so symbols and characters from this time are the theme, while the soundtrack is that of a large feast taking place. Characters include the King, Queen and Jester, while the other symbols are medieval-style food and drink items. The design is light-hearted, with the characters depicted in a cartoon-like fashion, and the music is similarly easy-going, featuring ancient pipe music and loud trumpet blasts on a winning spin.

Although the jackpot on King Cashalot begins at $100,000, a relatively modest sum for a Microgaming progressive pokie, it doesn’t remain at that level for long, with the average payout over the years being around $620,000. However, the most substantial wins have been significantly greater than this, with a payout as large as $1.5 million being won in 2012 at Royal Vegas Casino. The progressive jackpot pays out when you hit 5x King symbols on payline 9, so it’s important to remember that to be in the running, the maximum number of coins and paylines need to be played.

The progressive jackpot is certainly the most significant special feature on King Cashalot, although the regular gaming action is also entertaining. The wild and scatter symbols produce good payouts, and there is also an additional round, the Treasure Bonus feature, which is triggered when 3x dragon scatter symbols appear on reels 2, 3 and 4, and is a simple game that takes place on a separate screen and where players can win between 2x – 24x their total bet. King Cashalot can be played in regular mode or by using the adjustable Expert (or Auto-Play) feature.