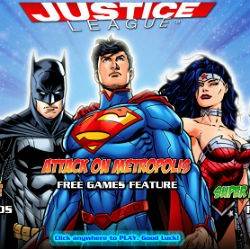 Justice League is a 5-reel 25-payline pokie released by NextGen in late 2016. The game is based on the comic strip by DC Comics, featuring the original super heroes such as Superman, Wonder Woman, Batman, Green Lantern, Aquaman and the Flash. It’s a standard pokie so it’s easy to get started. But despite its simplicity, NextGen has packed in a bunch of special bonus features like free spins and free games to keep both beginner and advanced players on the edge of their seats.

It’s a standard pokie so it’s easy to get started. But despite its simplicity, NextGen has packed in a bunch of special bonus features like free spins and free games to keep both beginner and advanced players on the edge of their seats. Attack on the Metropolis feature – this feature gets you 10 free games, during which more free games and extra wilds can be triggered. Get into this by spinning 3 Scatter symbols, which is the Bonus symbol. Super Hero Spins feature: You get these super free spins right after finishing the Attack of the Metropolis bonus rounds. Reels 1 and 5 will all have the same Super Hero symbol, and your win includes a wild, then you get a 10x multiplier. Super Hero Power Up feature – Get the same super hero on all of Reel 1, plus 1 more on a payline, and then Reel 1 will be mirrored on Reel 5. The reels will be re-spun with everything locked into place, until you stop triggering the super hero or wilds.

We’re happy to report to DC Comics fans that the Justice League has kept all of the original super heroes, and the pokie is nicely rendered to give it a comic strip feel. The game is set with the cityscape of Metropolis in the background and with the bigger wins, you’ll see your Super Hero flying through the screen. The music is awesome and the pokie certainly does justice to the original comic.

The base jackpot in Justice League is worth 300 coins, which puts it on the small side, even for a non-progressive game. You can win this by spinning 5 Superman symbols on a payline. While the fixed jackpot isn’t very big, if you get lucky with some multipliers in a bonus game, for example in the Daily Planet Bonus which has a 60x multiplier, you can still walk away with a decent wad of cash.

Other than the Attack on the Metropolis, Super Hero Spins, and Super Hero Power Up features mentioned earlier, Justice League also has some extra goodies up its sleeve: Daily Planet Bonus: This is also the scatter symbol and can come on reels 2, 3 and 4. Spin 3 or more of them and you’ll get a 60x multiplier on your bet. Team Rescue: With every spin, a symbol on reels 2, 3 or 4 can randomly turn into a wild, increasing your winning odds. Gamble Feature: Not unlike the Playtech pokies, you have a chance to 2x or 4x each win by guessing the correct colour and suit of the card that is facing down.