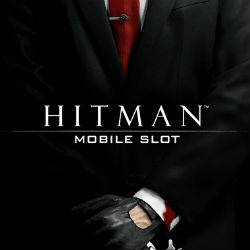 If you liked the movie, then you should check out Microgaming’s Hitman slot. This is a 5 reel 15 payline video pokie, based on the same story where Agent 47 is enmeshed in a political takeover in Europe. The game’s RTP stands at 95.84% – it’s not particularly high, making it a medium variance slot. However, even though it doesn’t pay out particularly often, there are plenty of bonus features that could add up to a contract with big money.

The story is that Agent 47 is a hired gun, hired by a group known as “The Organization” that’s involved in a political conspiracy, leading to Agent 47 being chased after by both the Russians and the Interpol. It’s a pretty dark thriller, but it’s not so hard to get your game on with Agent 47 on the reels. As usual, adjust your coin size first. This is located away from the rest of the bet size menu, and instead can be found on the round, red button on the left side of the screen. Coin size ranges from $0.01 to $0.50. Then choose the number of lines you want to bet up – from 1 to 15. Usually it’s better to bet on more lines so that it increases your chances of a win, plus in this case also tapping into some of the awesome bonus games. Then set the number of coins per line and you’re ready to roll. The symbols in Hitman from high to low value are:

The graphics in Hitman are slick – that’s to be expected since this video pokie is aesthetically based on the X-box game. The theme is dark as can be expected, but sometimes the reel may light up as it’s taken over by animated sequences. The soundtrack is an upbeat rhythm that can get annoying rather quickly, but that’s why there’s a mute button. Find it at the top right corner of the screen.

The fixed jackpot in Hitman is 4,000x your bet and will be yours when you spin 5 Agent 47 profile against the neon light. That’s not much, but keep your eyes open for the bonus games that come with random multipliers and you could cash in up to 270,000 coins.

So let’s get to the core of Hitman – the bonus features, and there’s several of them.

Look for the green laptop because when they land on reels 3, 4 and 5, they’ll trigger the Contract Bonus game. 5 villains will appear on the screen, each with a different bonus values. Select one of them and you’ll receive a bonus before moving on to a second screen where you’ll get a random multiplier on top.

Spin Insignia symbols on reels 1, 2 and 3 and trigger this bonus feature. Choose one of the 3 Insignia symbols that have been landed and it will uncover a multiplier that will be counted towards your bet staked. It’s simple and you can win up to 6,000 coins.

When you get those red 18 symbols on reels 3, 4 or 5, you’ll trigger a round of 18 free spins that come with a 2x multiplier. Expanding wilds may occur at this time to help you score some extra winning paylines.

Slick graphics from a hit movie and Xbox game, along with 3 different bonus features, Microgaming’s Hitman has everything one wants from a video pokie. Bet sizes also come with quite a bit of flexibility, making is a good game for players with different budgets. Beware though that this pokie falls into the medium variance range, which means it can take a small while before it pays out. For extra ammo, pick up a casino bonus before you join Agent 47 on his run.