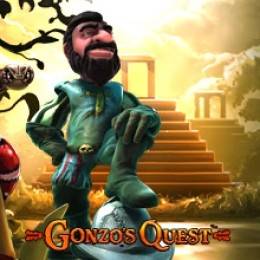 Gonzo’s Quest is one of NetEnt’s flagship pokies. It was one of the first games to break out of standard spinning reels by inventing Tumbling Reels. Here, the symbols fall into place and explode when you form a winning payline. The 3D graphics are refreshing, as are the payouts. The RTP is 96% which means you’ll be picking up your fair share of gold in this adventure with the Spanish Conquistador.

The symbols, which are are well-crafted drawings of stone carvings featuring Inca masks, animal gods and mystical icons, instead of spinning ’fall’ into place. The ambient background features jungle noises and a gentle rhythm of drums and pan pipes, but there are explosions when the Avalanche is triggered, accompanied by bursts of music, creating an effective crescendo of sound on all winning spins. As the reels don’t spin in the conventional sense, on auto-play Gonzo’s Quest pokie is undoubtedly one of the fastest games that you’ll find on any netent casino around.

Apart from the Avalanche multiplier, the gaming action on the Gonzo’s Quest pokie is relatively straightforward in that there are no elaborate bonus rounds, but the 10x free fall feature (essentially 10x free spins) is the game’s standout quality. It is potentially extremely lucrative, with a jackpot of up to 187,500x coins (up to $93,750) up for grabs. The Gonzo’s Quest free spins feature is triggered after hitting 3x free fall symbols on reels 1, 2 and 3 (the only reels on which this symbol appears). Played on a separate, albeit very similar-looking screen, when the feature is triggered the reels part, a golden Inca temple is revealed and Gonzo runs off in pursuit of it. During the 10x free falls, the Avalanche feature is active as in base play, but the multipliers are greater. All winning spins are automatically multiplied 3x, and then by 6x on the 2nd avalanche, 9x on the 3rd avalanche and 15x on the 4th avalanche. Wins continued to be multiplied by 15x until there are no winning combination on the reels, when the multiplier reverts back to 3x. Additional 10x free falls can be won during the feature, adding to the potential for a string of significant wins, making it a game we highly recommended playing at a Gonzo’s Quest casino.