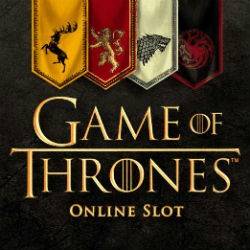 With five hugely successful series under its belt, Game of Thrones, based on George R. R. Martin’s series of fantasy novels, is one of the biggest hit TV shows of recent years. In December 2014, Microgaming sought to build on this popularity with their online pokie adaptation of the program. Available in both 243 ways-to-win and 15 payline versions, the game successfully incorporates themes and imagery from the show with relatively straightforward gaming action, along with an innovative free spin feature and some big payouts.

Free Spin Bonus Feature The free spin bonus feature is triggered by hitting 3x, 4x or 5x scatter symbols anywhere on the reels. Players are taken to a separate screen where they can select one of four different free spin options:

Additional free spins can also be triggered during the feee spin bonus feature. Gamble Trail Feature After any winning spin, players can choose to gamble their winnings by embarking on a four-stage gamble ‘journey’. At each stage – Raven, White Walker Direwolf or Dragon – you can flip a coin to double your win; a winning flip takes you to the next stage of the journey, which ends when you successfully gamble against the Dragon and the gamble limit is reached

Not surprisingly, Microgaming have sought to use as many themes and images, and as much music from the TV show as possible. As well as the Iron Throne, symbols include the crests of the different Houses who dominate the show: Stark, a silver wolf; Lannister, a red lion; Baratheon, a golden deer; and Targaryen, a red multi-headed dragon. These crests are skilfully created and there is lively animation of the symbols on a winning spin. The popular theme tune to the TV show plays throughout in a pared-down version, and in different version again during the free spin feature. Overall, the look and feel of the game should meet the approval of most Game of Thrones aficionados.

The variety of options on offer during the free spin bonus are an innovative and highly lucrative feature which ultimately increases the overall appeal of Game of Thrones.