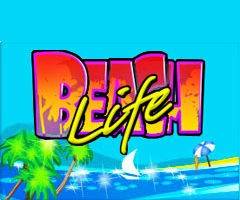 This is a bright and summery game is a progressive jackpot pokie from Playtech. Despite its lighthearted look and feel, this game pays out well above $1 million regularly. Other than that massive jackpot, Beach Life’s bonus rounds feature treasure chests where some good booty can also be won.

Beach Life was designed (by Playtech) to be fun and pleasant to look at, but in a way that means the visual design is not overwhelming. The game uses a host of bright, tropical colours, and the symbols (picnic basket, surfer, sunbather, etc.) are fun and depicted in a light-hearted comic book style, but otherwise this is a game that is made for players who prefer an unfussy design. The sound of the surf can be heard in the background throughout the game, and the sound effect attached to each spin replicates the sound of the handle being pulled on an old-time pokie.

To win the the progressive jackpot on Beach Life, you need to hit 5x Sun symbols on payline 20, so it’s important that you play the maximum number of paylines = $10 per spin. $50,000 is the minimum starting point for the progressive jackpot on Beach Life, although the average payout on the game is much larger, being in the region of $2.4 million. Very recent big wins have been recorded in June 2013 ($3.1 million) and March 2013 $1.8 million, although the record payout still stands at $7 million, won in January 2012.

The most outstanding special feature of Beach Life is of course the progressive jackpot, although in some ways the game’s very simplicity, in terms of its gaming action, visual images and limited bonus features, could in fact now be considered a special feature, when Beach Life is compared to the much more elaborate progressive jackpot that have come onto the market in recent years.

Sunken Treasure Bonus: In this bonus feature, triggered after 3x, 4x or 5x treasure chest symbols appear on any payline, players are shown a separate screen with eight sunken treasure chests. They can choose either 3, 4 or 5 chests (depending on how many symbols triggered the bonus feature), each of which conceals a value between $5 to $45. The revealed amounts are then added together to give the bonus win amount, which can be between $18 and 137.