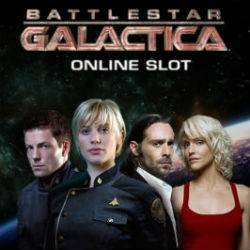 An impressive 243 ways-to-win pokie by Microgaming based on the classic science fiction series. Fans of the movies and TV series will love the video sequences in this game. 3 different modes reward players with various bonuses, leading to an exciting and fast-paced game.

A Microgaming masterpiece, Battlestar Galactica is a thrilling adventure video slots machine that keeps things exciting every step of the way. Aside from the motif, this machine was built in the contemporary Ways to Win format, which means there are 243 paylines spread across 5 reels. These paylines are always active, so it takes a bit of the pressure off of slots players by eliminating the need to remember, calculate, and select various paylines as is the case with many other slots machines. What players can choose is the amount they bet per line or round. Simply click up and down using the arrows that flank the BET section at the bottom of the screen to toggle through the amounts. Ranging from 1.5 to 15.00, Battlestar Galactica is one of the more expensive slots machines. The jackpot win is well worth the bigger ticket price though, as you’ll see below. Players can utilize the Autoplay mode if they don’t want to keep clicking on the screen. Set your wager, and decide how many rounds you want to play automatically. The computer will do the rest. You can even set it to go until a bonus feature is hit.

Battlestar Galactica designers did a great job making this an exciting slot through and through. The screen has the sci-fi spaceship flavour with real clips from the television series it is based off of, explosive sound effects, and riveting graphics that pop out at you and make the whole gaming experience come alive. You’ll recognize many of the characters from the show including President Roslin, Lt. Thrace, and Commander Adama. If the graphics weren’t enough, Battlestar Galactica throws in an invigorating soundtrack that will get your blood pumping and your heart racing during and between every spin. The sound effects are phenomenal, and every now and again someone speaks, giving it even more authenticity and linkage to the show.

Battlestar Galactica has a non-progressive in-game jackpot, which means you can win money if you trigger the right symbols on the reels. Just because it’s not progressive doesn’t mean it is a smaller amount though. The max jackpot that someone can win at Battlestar Galactica is a staggering 1,400,000 coins if all the symbols and bonuses line up properly. This amount can be landed during the free spins bonus round only. Considering the end winnings are multiplied by three, that makes things a lot more doable.

3 Modes: Battlestar Galactica has an exciting feature that randomly switches between three different modes: Normal, Run, and Flight. During each of these modes, the players receive various bonuses specific to that round, such as faster than light (symbols randomly change into winning tokens) and splitting wilds. Additional free spins can be awarded throughout the bonus round. Scatter symbol is Colonel Viper’s ship, and stringing together three or more of these will activate the bonus round. Here you’ll receive 15 free spins, a very generous amount in terms of industry standards, and wins are tripled at the end of the round.

What differentiates itself from many other games currently on the market which provide ten free spins during the bonus round is that Battlestar Galactica gives an impressive fifteen in order to maximize your potential winnings. Obtaining three of the scatter symbols (Colonel Viper’s ship) across the five pay reels will send the player to the bonus round. In addition to the number of spins, all wins during this round are multiplied by three. Play Battlestar Galactica at Spin Palace casino and get a $750 welcome bonus.