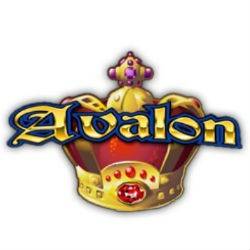 A renowned video slot from Microgaming that’s been around since 2006, Avalon has practically achieved cult status today. This beloved pokie takes you through the Arthurian legend, filled with free spins, scatters and multipliers along the way.

12x free spin bonus feature — triggered when 3x, 4x, or 5x Lady of the Lake scatter symbols appear anywhere on the reels. Wins during this feature are multiplied by 2x – 7x, with the multiplier randomly changing on each spin. During this bonus, there is the innovative added feature of the chest symbol becoming an additional wild, substituting for all symbols except the scatter, while a further 12x free spins can also be won. Gamble feature — any win during base play can be gambled up to four times. Players go to a separate screen where they are presented with a face-down card. Correctly predicting the colour of the card doubles any win, while correctly guessing the suit multiplies any win by 4x.

The largest jackpot available on Avalon is 210,000x coins ($420,000) when playing the maximum coin size and number and hitting 5x Avalon wild symbols with a 7x multiplier during the free spin feature. During base play, the largest available jackpot is 30,000x coins ($60,000) for hitting 5x Avalon wild symbols (again, betting the maximum coin size and number). It should also be noted that any win in base play can be multiplied by 2x or 4x through the gamble feature. So despite the lack of a progressive jackpot, some giant prizes are still to be had

The game has an Arthurian legend theme, and the character symbols are suitably mystical and mythical in their appearance, with gentle aqua and sepulchral greys dominating the colour palette (although the card symbols don’t quite match the theme). The soundtrack features a seascape under music with Celtic overtones, while wind chimes sound as the reels spin. However, the music as the win totals are added up is generic early Microgaming casinos style, which means it sounds almost country and western, which is oddly out of place with the rest of the game!

The variable multiplier and the introduction of an additional wild symbol during the 12x free spin feature are the most notable special features of Avalon.