The online casino industry can sometimes feel like it’s imprisoned by its past. Pokies are a direct translation of electromechanical fruit machines. But Virtual Reality technology now being adopted for gaming promises to change all that. Reels are about to be replaced by The Real 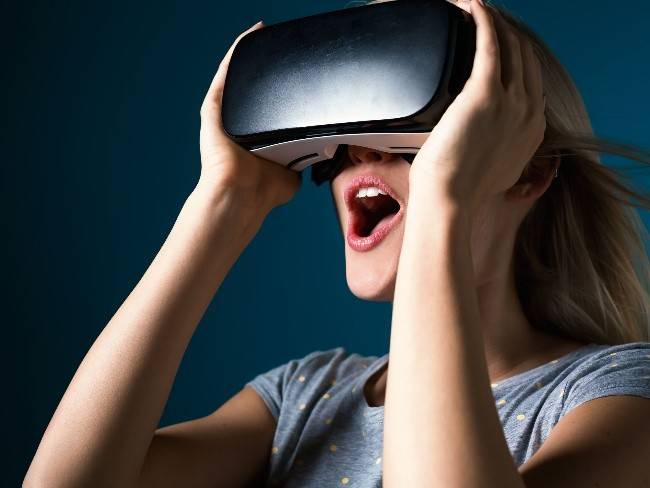 Think how conditioned we have become. Place your bet. Press Spin. Watch the reels. The reels land. Win or lose. Face it: sometimes we feel like hamsters on a treadmill. Sure, second screen games and bonus features add interest. We obsess on sticky and expanding wilds. A new style of scatter. A cool free spin sequence. Little pick ‘em games. Double or nothing gamble features. Every enhancement improves the gaming experience incrementally. But what if the main game experience were to be utterly transformed? What if pokies were to go totally … off the reels? Developers of virtual reality technology are taking pokies to places they have never gone before. Early experiments with VR did not exactly live up to the hype. Even in the 1990s, Nintendo rolled out its Virtual Boy and VFX1 headsets. But the last-millennium tech simply couldn’t deliver the goods. Only in the last few years have developers picked up the virtual gauntlet that the early visionaries threw down. The processors are faster. The glasses are better. The gloves are on. Early efforts simulated walking into a land-based casino, then sitting at a pokie, or table game, playing as you would in a casino. Microgaming did something like that in Slotsmillion. Big Spin Slots, Jackpot VR, and Casino VR followed. Well, it might save you a trip to Vegas, or Macau. You can rub virtual elbows with some avatars. But… well … Big deal.

Then there are slots like NetEnt’s Jack’s World VR, a new virtual spin on the Beanstalk Boy. You can play Jack. Climb a beanstalk. Meet the Giant. He can eat you. He-high, ho-hum. Next. VR-enhanced pokies also have come out for popular favourites like Starburst, Dracula, Miss Midas, Pirate’s Adventure. OK. The blood is redder. The coins are golder. Next. NetEnt created VR Roulette which gave you the game experience from the ball‘s perspective. 3D close-ups of the reels. There’s voice controlled VR blackjack. These add something but …. Do they live up to the dream? We think not. We think … we ain’t seen nothing yet. What’s already in 3D Hollywood blockbusters and MMORPG games are waiting to be transformed into a gambling experience – off the reels. Sure, you can interact (to some extent) with other players online and explore your virtual play world. Yet the major difference now between regular online casino games and VR games is now merely technical: a clearer, lag-free user experience in a sim casino. The games have not yet caught up. iGaming guru Mark McGuiness famously said that the key to gaming is the rush: “the emotional and physiological experience of playing at the casino tables.” With respect, this is a limiting definition. Instead, imagine gambling experiences that take place beyond the casino walls:

All this already taking place in VR MMORPG games at a high level of sophistication. World of Warcraft. Rift. The gamification systems are already in place: Getting points. Leveling up. Getting prizes. All that’s lacking is the betting component. Add the cold hard cash and you have a new breed of casino game. The worlds of VR gaming and VR gambling are converging. Fast. VR gambling bets are set to rise 8-fold by 2021, Juniper Research predicted in a late 2016 report. The projected turnover of US$520 million is mostly going to be wagered in an “immersive casino experience” not the real-world gaming adventures we have in mind. And most of the growth will be driven by high-rollers ready to invest in still-dear gear. What do you need to be part of the action? Well, get a headset. The Oculus Rift DK2, Samsung’s Gear VR and HTC Vive are state of the art. But new VR products are rolling out all the time. Fast. Your computer and graphics cards need to process 90 frames per second without breaking a sweat. You need at least an i5 4590 CPU and GeForce GTX 970. At ICE and other shows the big boys like Microgaming and NetEnt strut their VR stuff in closed-door “immersion rooms” for invited guests. But it won’t be long before those doors fly open. Our hope is that the next generation pokies break down the reel paradigm and head for the great wide open. We are still in the infancy of VR for gambling. Prepare for something realer than reels. More feeling for your money. Virtual Reality pokies are set to deliver more adrenaline for your NZ Dollars!