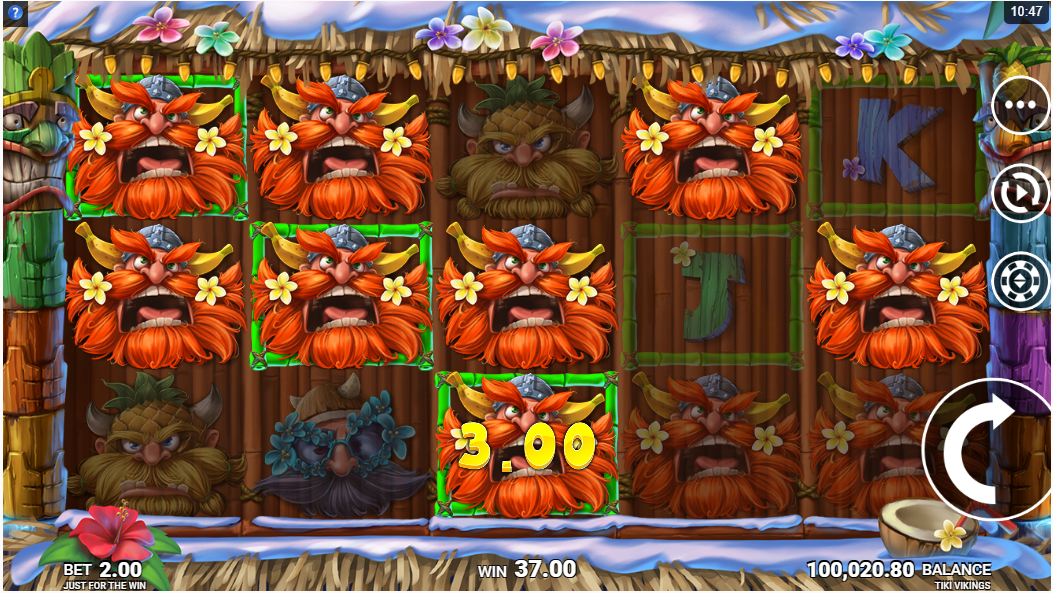 Microgaming’s newest pokie has been developed by Just For The Win. Tiki Vikings is a straightforward game with 5 reels, 20 paylines, and a minimum stake of just $0.10. You can select your stake on the right-hand side of the menu all the way up to $1,250. Quick Spin is enabled or disabled from the settings menu.

Landing 3, 4, or 5 matching symbols will reward you with a multiplication of your stake. If those are any of the four highest-paying symbols then you’ll trigger the Symbol Lock Re-Spin feature.

From highest to lowest, the symbols in Tiki Vikings are as follows:

If you’ve ever wondered what would happen when a horde of angry Vikings washed their longboats on the sandy shores of Honolulu then look no further. Clearly impressed, these bearded warriors have returned to the frosty plains of their Norse homeland with Hawaiian shirts and tropical fruit.

Players can expect the soothing atmosphere of a Tiki party for the main game. The breezy music and colourful imagery are the closest you’ll get to sandy beaches on this side of the internet. That will change once the Symbol Lock Re-Spin feature triggers. The Viking drums of war kick in as the game goes berserk and the Vikings show their true colours.

Tiki Vikings is hardly the best-paying pokie on the market. 300x your stake is the most you’ll get out of this. With a lower payout comes a higher frequency. It’s a medium-risk game so you can expect regular payouts.

Symbol Lock Re-Spin: Land a winning line with any of the four highest-paying symbols (the three Vikings or the game’s logo) and you’ll trigger this mode. Your matching symbols will freeze and an automatic re-spin comes next. Land another one of the same symbol and you’ll trigger another spin.

Symbol Upgrade: This is how you climb. For every successful Symbol Lock Re-Spin, you’ll fill up the Symbol Meter (the Totem poles on either side of the screen). Get three consecutive successful re-spins and you’ll trigger Symbol Upgrade. Your frozen symbols will upgrade to the next highest-paying symbol for the following re-spin. This Symbol Upgrade feature will get the hula party started.

Tiki Vikings is a fun and unusual pokie. The payouts are frequent but modest with an RTP of 96%. While the maximum jackpot is far from the highest on the market, the Symbol Upgrade feature kicks in regularly and can bring some big wins with it.

But most won’t play this game for the payout. Tiki Vikings is a polished game with a pleasing interface and a unique theme. Microgaming’s latest release invites Norse warriors to a Tiki party. The result is a fun experience which will entertain more casual players but those in search of big payouts may be better served elsewhere.