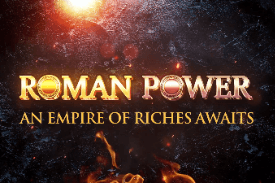 Microgaming is undoubtedly one of the largest software providers in the online casino industry. It’s supposedly the first true online casino software developer and has been providing us with astonishing games for years. For the past few years, Microgaming took the initiative to broaden its network. It’s been going on for quite some time and it has managed to create a reputable fleet of independent software developers. These studios create content exclusively for Microgaming that we can enjoy in various online casinos. With that being said, SpinPlay is the latest name in the mix. The first game from SpinPlay titled ‘Roman Power’ has already been added to Microgaming’s game network, as of June 18, 2020.

The Story of SpinPlay

SpinPlay is a considerably new content developer, based in Las Vegas, NV. Their journey started only in 2019. It’s a company developed and founded by mathematicians whose sole purpose is to make an enjoyable gaming experience for the players, with math. Thanks to the precise math models, the theme, the sound, the mechanics, and every other aspect of an online pokie comes out perfect with SpinPlay Games. It’s a team of qualified professionals who focus solely on the player’s convenience. According to the CEO of SpinPlay Game, Mr. Anton Kuhlmann, “Collaborating with Microgaming is a real honour, and we are extremely proud to join its lineup of world-class content partners. We focus on the holistic design where our themes, sounds and animations come together with our fine-tuned math models to deliver fun and rewarding gameplay experiences.” The CEO also went on to say that, “Our debut title Roman Power is a high-volatility game with both theme and math targeted at more experienced players. This game offers huge win potential on every spin through the combination of stacked symbols, expanding wilds and multipliers. We look forward to releasing additional exclusive titles, including our second game Almighty Aztec, through Microgaming’s leading content aggregation platform in the near future.”

Roman power is a high-volatility game with a classic 5×3 reel and 20 paylines. There are multipliers and wild features to keep the game entertaining for the players. It’s exclusively designed for Microgaming.

Microgaming is also very happy to extend its network. The CEO of Microgaming, Mr. Andrew Clucas says, “Joining our diversely talented network of content partners, SpinPlay Games employ a mathematics-based approach in pursuit of delivering uniquely creative and playable games, with Roman Power forming the vanguard of a feature-rich lineup of upcoming new content. We welcome the team on board.” To get in on this latest hit, play Roman Power now!