Skip to content
Home > Magazine > Excited about the new games from Microgaming? 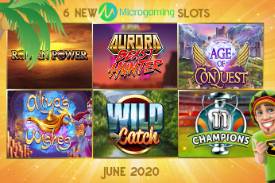 Microgaming has been consistent with its releases for a long time. It’s a software development company located in the Isle of Man. It’s been supplying top of the line games to online casinos all over the world for over two decades.

Every month, Microgaming comes up with a new set of games exploring the new horizon of online casino games. Microgaming has tapped into all possible themes with its employees’ diverse creativity. June 2020 is no different as well. Microgaming is ready to roll out a series of games all over the month with help from its independent studio network. It’s been a very wise move on Microgaming’s end to include independent studios into the mix. It has enabled the game library to be more agile and versatile. Without further ado, let’s take a look at the new games from Microgaming scheduled to release in June.

11 Champions is a football-themed online slot developed for Microgaming by Gameburger Studios. You can pass or dribble the ball to score winning combinations. It’s a 5-reel 20 payline game with very high volatility. The theme is amazing and pretty unique at the same time. The game features wilds, scatters, jackpots, and the trademarked Wild Streak Respin to keep the entertainment level at its highest.

If you’re a fan of Arabian fantasy tales, Aliya’s Wish is just the game for you. Developed by Fortune Factory Studios, Aliya’s Wish is a fantasy-themed online slot packed with symbols. A genie is present to grant your wishes on your journey and the sound is so soothing that you won’t feel like leaving the game anytime soon. Rolling stones, wild stacks, and Win Booster are some of the exclusive features of this new title from Microgaming.

It’s another fantasy-themed online slot and it’s developed by Neon Valley Studios. Age of Conquest will take you to an era where swords and sorcery reigns. You’ll be presented with a journey where you have to beat the dark forces by collecting diamonds and unlocking wild reels. The free spins round feature various riches that you have to explore inside a throne room. Overall, the gaming experience is very good along with great sound design.

Filled with four different types of wilds, Aurora Beast Hunter is a walk through the 90’s memory lane. Aurora is your protagonist and your goal is to defeat the beasts with her. This action-oriented game is developed by Just For The Win Studios. The sound design is so awesome that you’ll get drawn to the game. It’s a massive 40 payline game with lots of cash prizes and random wilds.

It’s a really busy month of Microgaming because there are lots of other games scheduled for release. Crazy Tooth Studios, Golden Rock Studios, Realistic Games, etc. developers are working relentlessly to make the gaming experience even better! Try these games at our recommended casinos!