A new pokie from Thunderkick just came out!

A New Game, A New Adventure 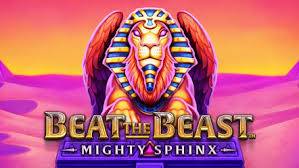 Thunderkick is one of the leading software providers. The long-running series Beat the Beast has been a fan favorite for quite some time now. Thunderkick also encourages fandom by providing them with new titles every now and then.

If you’re acquainted with the series, you should know what it’s about. The previous games from the Beat the Beast series have presented new monsters every time with a new game. The players had to overcome the challenges and beat the boss in the form of a pokie. In the new one, the monster is named the Mighty Sphynx. It might the hardest of all. Some of the previous monsters include Kraken’s Lair, Griffin’s Gold and Cerberus’s Inferno. The new one, Sphynx has emerged from the Egyptian folklore as well. You have to beat it to get all the treasure it has. The slot offers a tremendous 96.14% RTP. It has 9 paylines. It’s a high volatility pokie which means that there’s even more fun. The boss might seem very hard to defeat this time, but don’t worry because there’s a wide array of special features to aid you during the journey. The game is set in the Sahara Desert with pyramids and other infrastructure from Egyptian mythology. The visuals are just awesome thanks to the artists at Thunhderkick. The landscapes are visually engaging enough to keep you hooked to the game. You’ll notice a desert sun as the backdrop of the game. You’ll also notice the classic symbols that are an integral part of the series. There are high-value symbols like Scarabs, Scythes, Ankhs, and of course, the Sphynx. There are low symbols like 10, Jacks, Queens, and Kings as well. The special features play a huge role in helping you beat the Mighty Sphynx. Re-spins, wild upgrades, free spins, etc. are the most commonly found. Try out the new Beat the Beast game now.